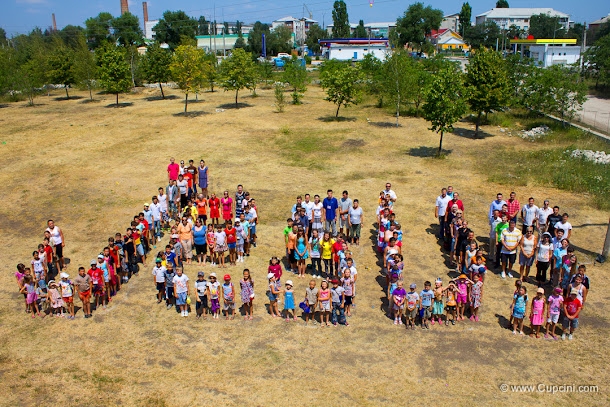 Then he believed in the Lord; and He reckoned it to him as righteousness.  (Genesis 15:6)

From July 2 to 9 Moldova for Christ ministry conducted English Camp 2012 in the city of Cupcini, Northern Moldova. 150 participants of all ages from all ends of the country joined the camp. Some participants traveled as long as seven hours by bus. This year we taught the study about Abraham using “God’s brave explorer” Precept Bible study in English. Everybody enjoyed studying these materials because they teach you how to discover the truth for yourself and how to apply it in your everyday life.

Cupcini church members were very active in opening their home to participants that came to camp from other cities and villages. So many church members from Cupcini, Edinet, Briceni, Balti, Gordinesti and Chisinau churches volunteered at the kitchen preparing meals for all campers three times a day that almost every day we had more than enough people wanting to help. Some volunteers came as early as three days in advance to help with all preparation, and worked all day long doing all that was needed. 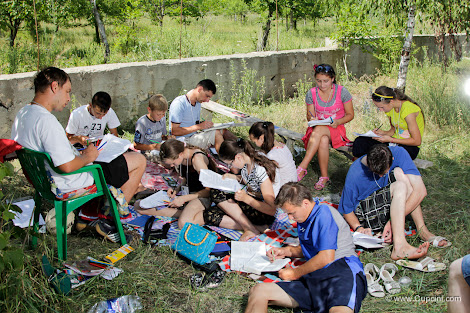 Fifteen orphans joined the camp and for most of them it was the longest distance they traveled in their life. It was great that they were placed in the camp with other kids. They were moved when found out they will be staying with Christian families all camp. The change in them was so amazing. The first day some of them cried every time we tried to talk to them. But by the end of camp they were like part of our big family – running, playing, laughing, singing with us, and just enjoying the time together. Number of them were saved. 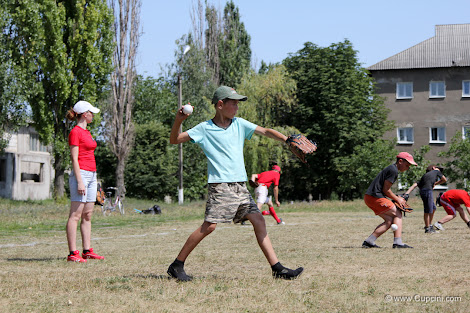 Over the years baseball clinics became indispensable part of the English Camp and an additional attraction. This year we had T-ball clinic for small kids and baseball clinics for older kids. And of course the BIG game last day of the camp, when most participants from the camp went to the field also, supporting their friends as everybody strived for victory. Chuck Nave, baseball player from Sanibel, FL is the heart of our baseball program for years. As result, Moldova for Christ Ministry already has three teams that meet for Bible study and baseball trainings several times every week in three cities: Cupcini, Balti and Bogdanesti. 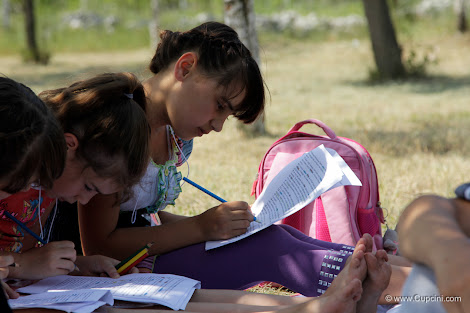 Another tradition at English camps is to celebrate the 4th of July with the whole camp. Parents of a girl in the camp bought roses for every American citizen in the camp and the flowers were presented to them on the stage during morning chapel. At the evening all-camp meeting a presentation was prepared to show how Bible values were foundational at the writing of United States Constitution, presented by Chuck Nave. 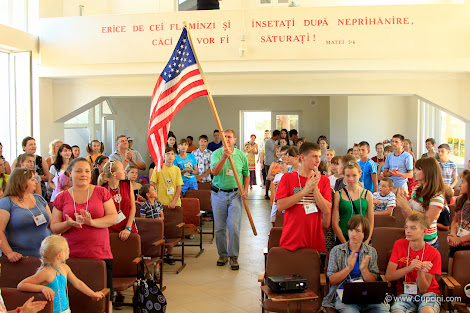 Most moving event in camp was one evening meeting when after the sermon preached by Mitchell Pezzi an invitation to repent and trust Jesus was given. One boy said to the leader of the group sitting next to him: I want to go forward, but I am afraid to go alone. Can you go with me to the stage? After these words two of them went forward and kneeled at the cross. One by one more kids joined them, until the stage was completely filled with about 50 children and adults seeking forgiveness from Jesus Christ for their sin. One little girl as soon as she finished her prayer asked a nearby leader of the group: How should I live my life now?

We had an amazing English Camp this year and amazing time when we watched God’s hand on everything that was done. We thank God for Sanibel Community Church team that came with eight people and worked tirelessly all day long. As soon as the camp was finished several young people approached us asking to be baptized and to going the church. We praise God as we watch how young people are saved and His Kingdom is growing.